Warren Beaty Salute – The Museum Of The Moving Image

The Museum of the Moving Image presented its 30th annual Black-Tie Salute to actor, producer, director, writer, WARREN BEATTY. The evening featured cocktails, dinner, and an award presentation, featuring clips from Beatty’s career introduced by his friends and colleagues. 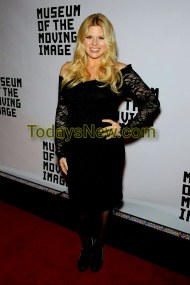 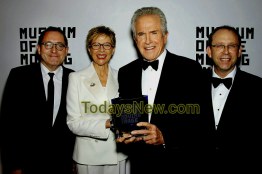 Since starring in his first film, Splendor in the Grass, in 1961, no actor has been said to have demonstrated a greater longevity in movies than Warren Beatty. Few people have taken so many responsibilities for all phases of the production of films as producer, director, writer, and actor, and few have evidenced so high a level of integrity in a body of work. At least fifteen of Beatty’s films are often referred to as classics: Bonnie and Clyde, Shampoo,Reds, Heaven Can Wait, Dick Tracy, Bugsy, Bulworth, Splendor in the Grass, All Fall Down, McCabe and Mrs. Miller, The Roman Spring of Mrs. Stone, Mickey One, The Only Game in Town, Lilith, and The Parallax View

In his latest film, Rules Don’t Apply, An aspiring young actress (Lily Collins) and her ambitious young driver (Alden Ehrenreich) struggle hopefully with the absurd eccentricities of the wildly unpredictable billionaire Howard Hughes (Warren Beatty) for whom they work. It’s Hollywood, 1958. Small town beauty queen, songwriter, and devout Baptist virgin Marla Mabrey (Collins), under contract to the infamous Howard Hughes (Beatty), arrives in Los Angeles. At the airport, she meets her driver Frank Forbes (Ehrenreich), who is engaged to be married to his 7th grade sweetheart and is a deeply religious Methodist. Their instant attraction not only puts their religious convictions to the test, but also defies Hughes’ #1 rule: no employee is allowed to have any relationship whatsoever with a contract actress. Hughes’ behavior intersects with Marla and Frank in very separate and unexpected ways, and as they are drawn deeper into his bizarre world, their values are challenged and their lives are changed.

Beatty wrote, produced, directed, and stars in the film opening in theaters on November 23, 2016.

The Salute will raise money for the Museum’s education programs, which serve more than 60,000 students per year. This is especially fitting, because Warren Beatty’s film Bulworth, a brilliant satire about American politics and race, has been a staple in the museum’s Screening America education series for years

Museum of the Moving Image (movingimage.us) advances the understanding, enjoyment, and appreciation of the art, history, technique, and technology of film, television, and digital media. In its stunning facilities—acclaimed for both its accessibility and bold design—the Museum presents exhibitions; screening significant works; discussion programs featuring actors, directors, craftspeople, and business leaders; and education programs. The Museum also houses a significant collection of moving-image artifacts.